Boffins in the French Alps

Following on from the successful Scotland trip Ken was tasked (vaguely volunteered) with sorting out a trip to the French Alps.  Ken rose to the challenge and the dates were set 4th – 12th July.

Like all Boffins trips things seldom go smoothly, right from the start it looked as though we were going to miss our ferry due to the M4, M25 & M26 all being at a virtual stand still.  I left with Ken, Nick & Robin from Iver Heath, whilst Stav picked up Garry & Geoff from Aylesbury.

A slow and painful drive to Dover was only endured by the occasional flash from a group of girl in a car that we managed to spend a reasonable amount of time alongside on the motorway.  Regular texts were received from Stav on their progress behind us.  We couldn’t understand how he was catching us up through the traffic, until we later found out that he was driving on the hard shoulder, until other motorists were threatening to run him off the road.

We finally made it to Dover only to find out that the ferry was delayed for 2 hours and wouldn’t be leaving until 1 a.m.

Once on the other side the pace quickened on near empty roads.  Stav’s car appeared to have a binary accelerator, either full on or off.  As a result it wasn’t long before he vanished into the distance after the first toll.  Many hours later we met up outside of Lyon and then made it all together to the Chalet Berwyn in Briancon.  The accommodation was perfect, large living area, Balcony, BBQ, a bedroom downstairs for Geoff & Bruce (the snorers) and a further 3 large bedrooms upstairs to sleep us all comfortably.

Bruce drove himself a day later and joined us on the Sunday evening. 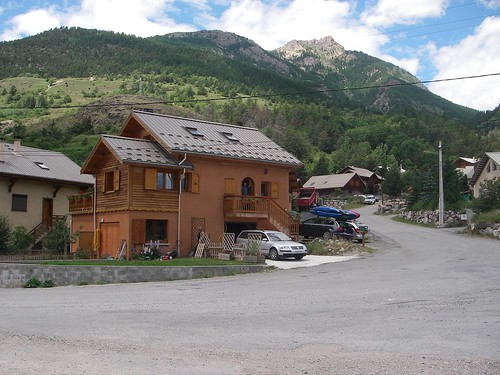 Home for the week – Chalet Berwyn

Everyone was up for an easy start.  We headed to the L’Argentière slalom site.  Pretty easy paddling, grade 3 at most, but this gave us the chance to adjust to alpine volumes.  4-5 runs were made down the 200-300m long course after which we couldn’t be bothered to walk our boats back up to the start anymore.  Next we headed to the Lower Gyronde.   Again, nothing too challenging (gd 3) and we finished the day with no swims, no drama’s and most unlike us, not much faffing.

We started the day a little later than Garry would have wanted, due to being back too late the day before to get provisions from the supermarket for lunch.  Garry is a natural leader (nicknamed The Captain) and tries to keep us in check, making sure we get our arses in gear and out of the door.  It’s a thankless task……………..& some day’s it’s like trying to herd chickens.

We finally left the chalet on the way to the Upper Guisane.  It’s a nice 11k grade 3 river with a bit of easy grade 4 in the middle.  We took the opportunity to have a look at the grade 4 section on the way to the get in and made the decision that it wasn’t a problem for anyone.  I don’t know why we bothered as by the time we had got to it; the river had risen so much as to make it unrecognisable.

We had a pleasant start, took in the stunning scenery and waved to numerous people as we travelled down river.  After approx 3k a stream entered the Guisane and turned the lovely clear blue water into a brown mess.  The volume picked up a bit and before we knew it we were at the grade 4 section.  I’m not quite sure what happened but no one at the front attempted to make an eddy before the section (not that there many anyway) and everyone tumbled down the rapid in a rather haphazard style.  No casualties though and we re-grouped a little further down stream having split into 2 groups.

The river continued to keep us entertained for the rest of the run with plenty of nice big and bouncy water, through pine woods and even people’s back gardens at one point.  11k was paddled before we knew it and lunch was eaten by the side of the river in Serre Chevalier. – Life was good.

2nd river of the day was the Onde.  We eventually got to the river and Ken & Garry tried to decipher a notice at the put in (to me it read that there was domestic appliances in the river!!).  A moment later an official looking chap turned up and reinforced that we couldn’t get on here and had to put on 300m down stream.  Also, there was one bridge further downstream that we had to get out 20m before and put in 20m after due to building works. (Oops most of us missed this!)

Not much really more I can say about the Onde, mainly because I promised Bruce I would stop moaning about it.  In its defence it needed more water, had unnecessary mandatory portages for no apparent reason (work had been completed). And I guess the scenery was ok.  Unfortunately the pin potential was high and Geoff was the 1st swim casualty of the week.

Ken & Nick hadn’t had enough and took the opportunity for a blast down the Gyr.  It’s a 3k grade 4+ run that took them in the region of 20 minutes to finish.  They got of the water wide eyed and gibbering, having it seems thoroughly enjoyed the white knuckle run.

1st river Upper Ubaye – Stunning scenery with the river surrounded by mountains on each side, Grade 2-3.  Roughly 8k.

Throughout the week Ken was invariably pushed out in front to probe the river.  Ken started down a blind rapid and tried to position himself in an eddy so that he could signal the rest of the group down.  The eddy he chose had a horrible eddy line resulting in a capsize.  Unfortunately for Ken it was very shallow and fed up of grinding himself on the bottom he reluctantly bailed.  Robin was providing safety cover from the bank and beckoned someone to come down to go after Ken and his boat.  Ken is by far the best boater in the group so you can imagine the thought that if Ken swam it can’t be good.  Everyone pointed to Garry “what me” and he reluctantly went.  Only Ken’s pride was hurt and the boat was recovered slightly further downstream minus a throwline. 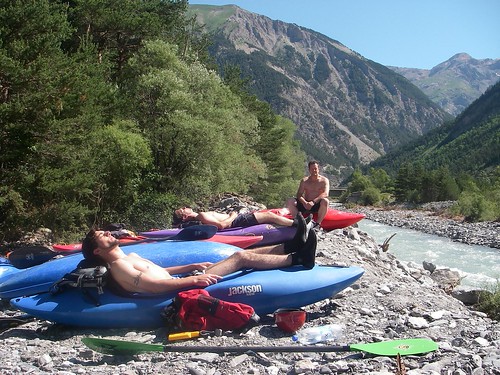 Upper Ubaye – Chilling out in the sun whilst the shuttles were sorted.

Nick & Ken chose to run the Lower Guisane, continue on down the Durance with the take out at the bottom of the road by the chalet.  Geoff chose a good book and the rest of us decided to rent mountain bikes.

We found a shop in Serre Chevalier, just across the road from the cable car that hired out pucker full suspension down hill mountain bikes.  So looking like ninja turtles with our full face helmets, back protectors, arm & knee protectors, etc we took the cable car up to the top of the mountain.

What a rush.  It felt like we were going down hill at the speed of light, even though in reality little old ladies were going past us as if we were standing still.  In all, 3 runs were made down the slopes.  If we hadn’t of got stuck on a broken chair lift (60ft in the air swaying with the breeze) we could have probably managed more runs, although I’m not sure my body could have.  So much for a rest, but brilliant fun. 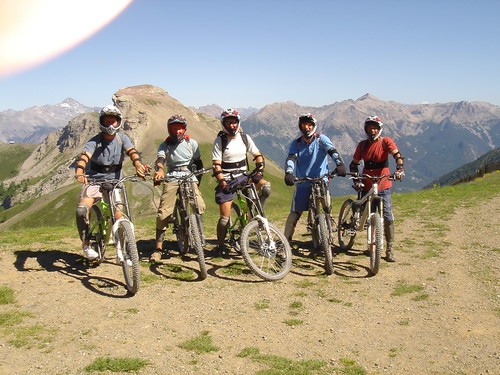 Ubaye Race Course again.  We kitted up and got on the water.  A fairly large crowd of rafters had built on the bank to watch us set off.  Stav didn’t disappoint and swam in the first 50ft after lazily paddling into a hole.

Gear was recovered and the rest of the run was completed without incident. 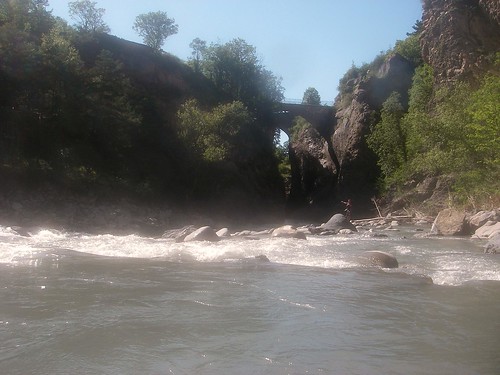 On the way home we stopped off at the Rabioux wave.  Geoff, Ken & eventually Nick decided to give it a go.  The rest of us sat with a coffee and watched the carnage of raft’s, hydro’s, etc coming through.

The wave was giving out some real beatings and the local boys weren’t doing much.  All the boys did the Brits proud in their creek boats and showed how it should be done.  Nick pulled off the top move (intentionally of course) nailing a barrel roll a clear 2ft off the water, retaining it on landing.

I could spend a whole day there, the entertainment value is priceless.  So much carnage it never gets boring. 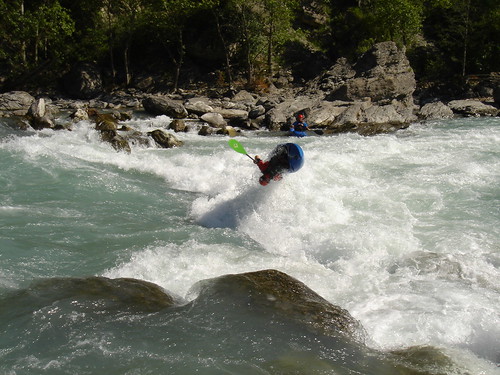 Gyronde again in the morning

In the afternoon Ken & Garry paddled the Lower Guisane to the chalet.  The rest of us went for a spot of shopping and café culture in Briancon.