Six Boffins about to paddle the Dee for the very first time.

Scene, an overcast North Wales car park, Six Boffins about to paddle the Dee for the first time.

After finding the river, we put on the adjacent canal to paddle upstream to the rivers start. Mistake, the canal dead ends leaving us to scrabble up one bank and down another into the river . 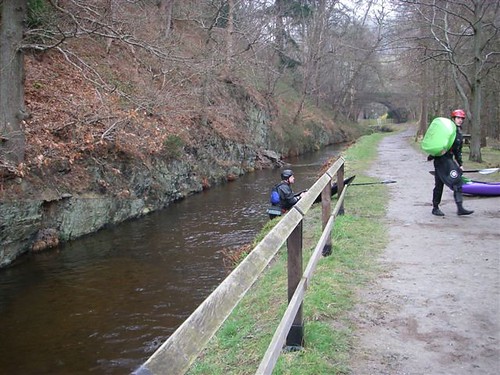 Shaky start, but we were now progressing. I was out front, and on seeing the river drop away  motioned the others to an eddy with  “I think this is the Serpents Tail, I’ll go look”. I broke out half way down this fun grade four to find that everyone had followed me down in true Boffins style (boats capsized, on top of each other etc) Unfortunately Mark carried this to its logical conclusion and ran the “Sting in the Tail” (a drop with attendant sticky stopper and comedy undercut) upside down, appearing next to his boat cursing Pyranha outfitting! 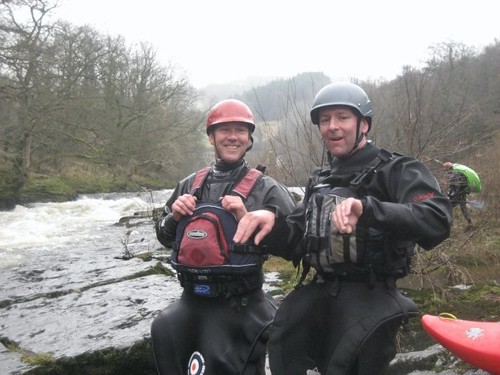 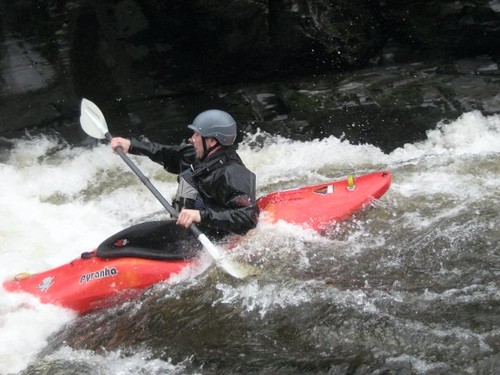 A second run down proved (much) more successful, and we continued, passing JJ’s to Town Falls. This was paddled more conventionally (and successfully) and we shot Town weir to the get out. 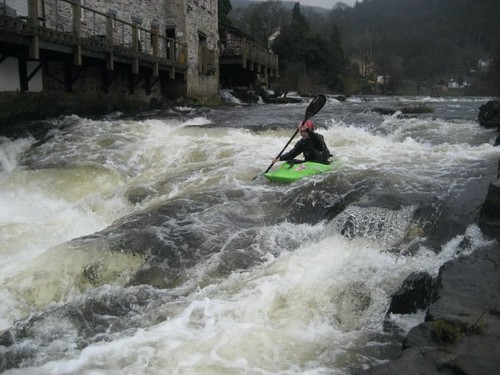 However we had decided to “enhance” our paddle , adding five miles. If anyone else fancies this DON’T! Its  cold boring grade one, with the car park a 15 minute uphill carry from the egress. The only entertainment was a gimped up bloke (Geoff) groping in his drysuit fly only to find his thermals were backwards and the the corresponding opening was by his bum. Not pretty! 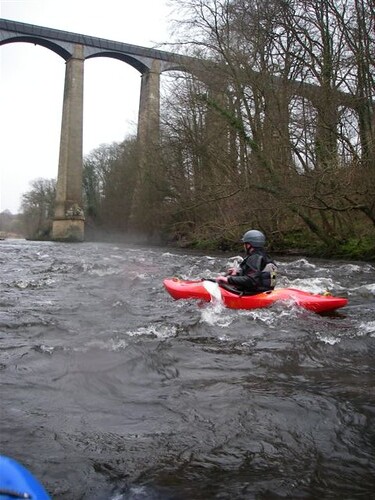 We had time for a quick run down the normal run again, before the Saturday guys had to go, leaving Geoff, Mark and myself to find our accommodation. This was good, in the yard of a pub, which we determined to investigate later. However, within five minutes of getting our room, Geoff had locked the keys inside!
A meal and excellent evening followed. I have never seen so many attractive local ladies in one pub before. I thought I would have to close Geoff’s mouth for him! Shame Pete and Wylie weren’t there! The downside was a local trying to sell us stress management!
Straight after breakfast and an attempt to fuel the car (cash only) we arrived at the Tryweryn to meet Gary and Ciaron. Sadly Marks valuables didn’t, having been left on the roof at the petrol station. Mark flew back but no joy. Still think he was more upset about loosing his cigarettes!
Finally, we got on the Lower Tryweryn, the idea, to give Ciaron a taste of river running. This went off without incident, with Ciaron making things look easy and enjoyment for all,
All that remained was to persuade Gary to run a now two feet higher Dee on the way home. This was superb, big waves eveywhere. Town Falls was memorable, the run in now involving threading a narrow weakness through a grabby stopper!
A quick drive home and we found Hurley was on four. What could be better!