Easter, with its two bank holidays, is definitely a weekend to be made the most of. So the TVR crew comprising of myself, Gareth, Chris Millbank and honorary non TV boater, Glyn Richards decided to head over to Bovec in Slovenia, home of the beautiful Soca river. With Easter falling about a month earlier than most years, the visit was a little colder than normal. 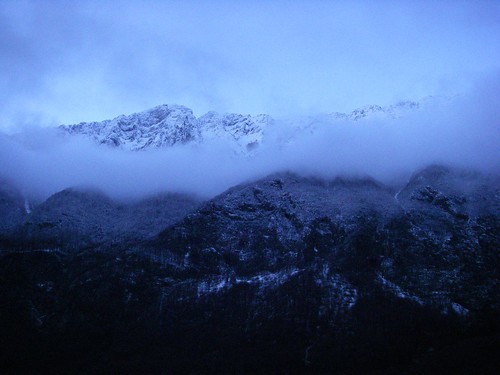 As a hint of things to come, Chris and Gareth got stuck on the M25 on their way to Stansted – Glyn and I who had got the train from central London arrived first. When they were finally able to make some progress despite the bank holiday traffic, Chris and Gareth dropped the boats off to us and parked the van in the car park. After some creative check-in attendant/ bus driver persuasion, we made the check in with 30 seconds to go. The flight proceeded without further hitches and we landed in Venice, Italy in the dead of night. 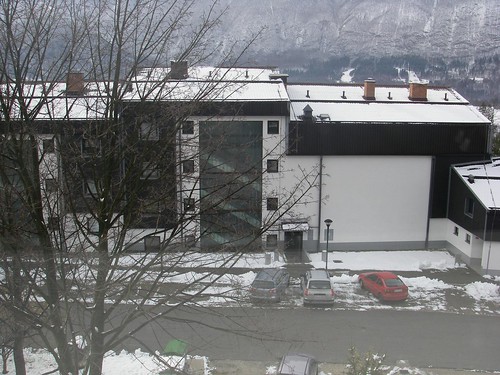 From Venice to Bovec is a two hour drive. IF you know the way that is. Team TVR had discovered that Slovenia is not on the SatNav map. After Italy was just a black blank space. In our great wisdom we made a few good choices – turn right out of the airport, don’t buy a map and definitely avoid the toll roads. Four and a half hours later at around 3am in the morning after the valiant driving by Gareth, and Chris’s smooth talking to the SatNav lady, who he named Sandra, we eventually arrived in Bovec. 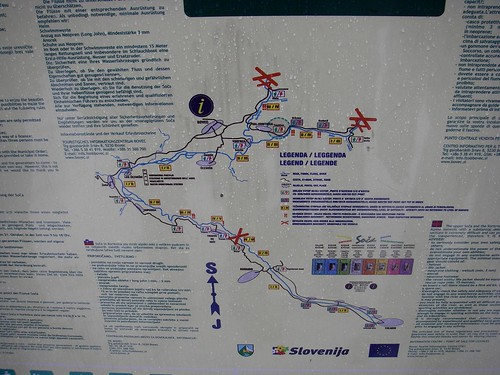 I had arranged to pick the keys up from a hotel, having anticipated a late arrival (although we did think we’d get there much earlier). I had a look around and the hotel seemed to be closed. After a little driving around I was preparing myself for the horrible prospect of having to sleep in the car – it was freezing cold and we were all absolutely exhausted. Chris decided to go and see what time the reception at the hotel opened in the morning. Apparently Chris pretended he was called Paula and had an encounter with a massive Slovenian guy called Frank. We didn’t ask any more questions about that incident! Suffice to say we got our apartment key and crashed out. 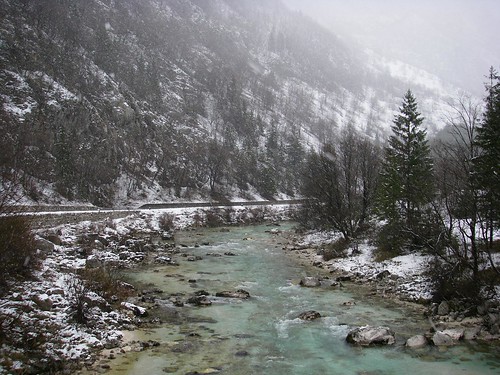 We woke somewhat late, and after a leisurely start, we paddled a section of the Soca above Bovec. The run began at leisurely pace, as team TVR admired the beautiful scenery and azure waters of the Soca. The river then narrowed to form a small gorge – we inspected the small undercut on the entry rapid, had a little look around the corner and off we went.  The take out was not too much further and we got out of the river – in the time we had been on the water, snow had fallen to cover much of the ground and we walked out through the forest. 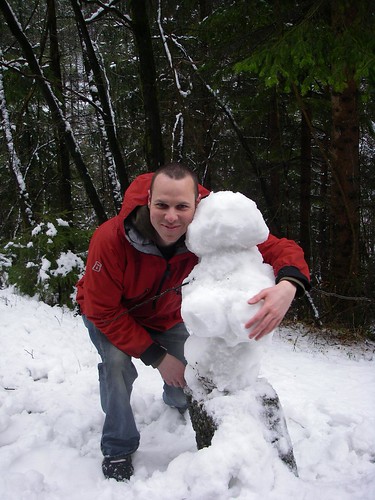 We bought a crate of beer, a litre of 75% (volume) rum and a bottle of gin… ate some excellent local pizza, and had a few drinks with another group of TV paddlers headed by Lucille in a bar called the Pink Panther. There were a few sore heads and 15 cms of snow when we woke up so we decided to take a day of sightseeing. We saw a bit of the area and finished the day off with a civilised dinner with Simon Westgarth, his wife Satu and Dave Carrol. 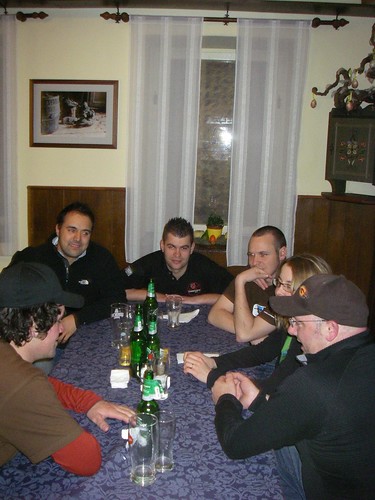 The next day was much warmer – and we did a run of three sections of the Soca, below Bovec including the “classic” section. Gareth and I attempted some hitch-hiking, before discovering a kayakers’ café and hanging around in the car park… which proved a lot more successful. 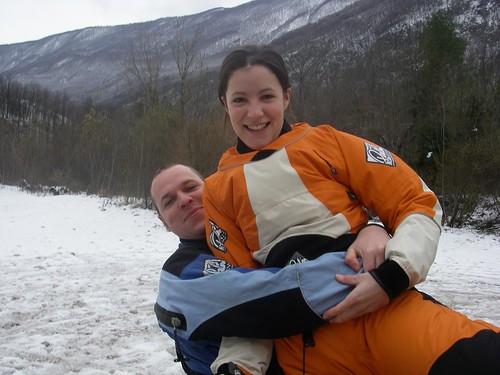 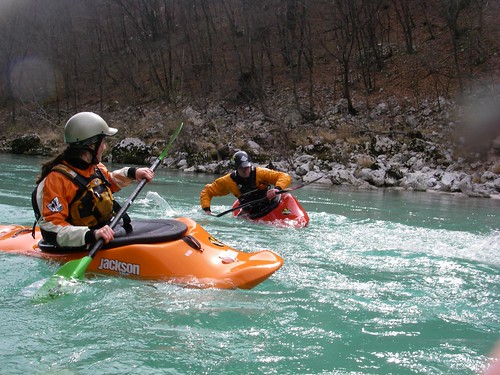 The first section was a gentle class 2 bimble, upping its grade on the classic section to about class 3- and ending with the class 3 technical boulder garden known as the slalom course, just above Siphon Canyon. 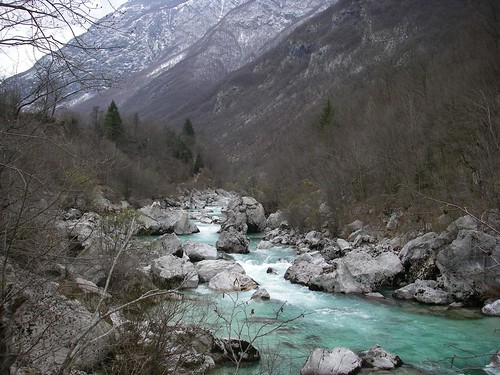 Following Simon’s inside tips, we went for a delicious pancake at a local campsite and then headed home for a quiet night – making only a small dent in the alcohol supplies. 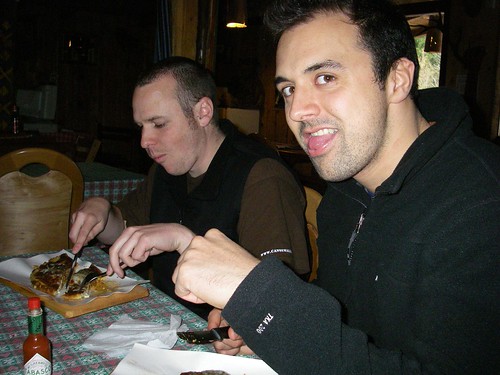 The next day came, and the landscape was white again. After much faffing about whether we would paddle or not, Glyn made us get on. Gareth helpfully volunteered to be the shuttle bunny, and Chris and I gritted our teeth, as the wind was quite biting once on the river. We did the same three sections as we had the day before. And despite Glyn’s protests, declined to run Siphon canyon. Simon’s word of warning ringing in everyone (else’s) ears. Despite being a class 4 run – there is no room for failure because as the name suggests there are numerous undercuts and siphons – one of the rocks has some crosses of remembrance as a result. 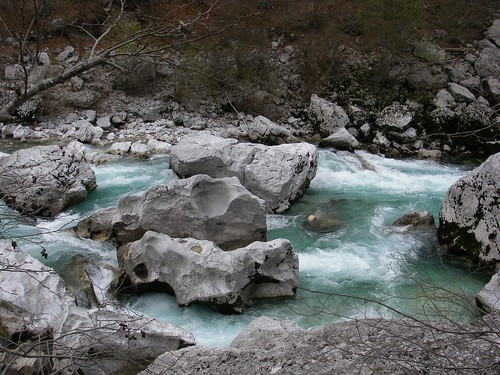 Our journey home proved far swifter than the journey out – we happily paid the toll and were in Venice in time for a meal. With no Italian speakers in the group, I made some creative attempts, we had a little help from Sandra and we eventually found a pizza restaurant. We were almost back on English soil and Gareth went for the junk food pizza – burger and fries on a pizza! 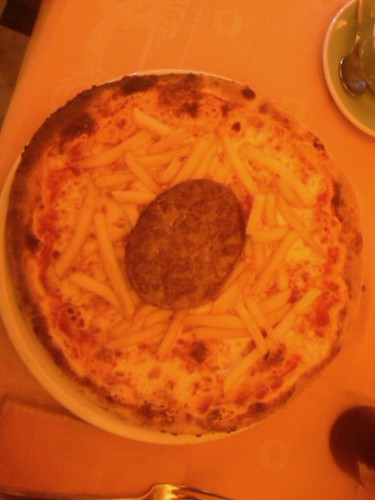 We found a bar for our final beer (and a few limoncellos), then made our way back. It wasn’t until we had checked all our kit in that we realised that in all the excitement and drinks, we had forgotten to fill the hire car up with fuel, which meant yet again typical of Team TVR we had messed up and were now going to get a fine!! In true TVR style – Gareth’s van got in a mood on the way home.
All in all a great trip – thanks to the boys for humouring my crazy idea to go to Slovenia in March and putting up with me once there!